From Wonders of the World to the Wonder of Words

Down on the alameda, the Plaza de Compostela, the feria de los continentes has packed up and gone, presumably to peddle interesting items from India, Africa and South America in other parts of Galicia. The stalls did not stand empty for long and were soon filled with the feria de los libros.

We rather hoped that there might be interesting collections of second hand books to rummage through but sadly this was not the case. No chance to find a rare first edition of some out of print book signed by the author here. Rather than that, this seems to be an opportunity for all the booksellers of Vigo to have a central location for a while, advertise their wares and sell some books to the tourists who come in by the busload and the boatload. There was an excellent collection, as usual, of translations into Spanish and Gallego of the works of Ken Follett, Donna Leon and many others who I expect to see on the shelves of Waterstone's in Manchester.

The stall selling Gallego cookery books had a good throng around it. How many of these enticing-looking collections of recipes, I wonder cynically, are bought by holiday-making housewives, perused over coffee on the day of purchase and then end up gathering dust on the kitchen shelf.

One stall was selling A Enciclopedia Galega, a huge collection of many tomes. I had not imagined such a thin 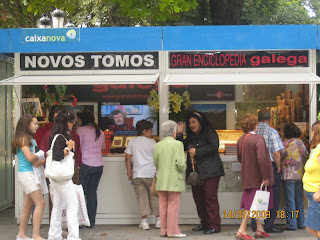 g existed although, even in this age of electronic information storage, many Spanish homes still have the encyclopaedia on the bookshelves to help encourage their children to learn. So I suppose, logically, if children are being educated in Gallego, then parents will buy the encyclopaedia in Gallego. It did cross my mind, however, that as they keep working on and adjusting and verifying as normas (the standard rules for the Galician language) it might be necessary to revise and re-publish A Enciclopedia Galega just as frequently to ensure that the knowledge is correctly expressed. Ah well, I suppose it all leads to extra sales!

In amongst the stalls was a tent where a crowd of children were being entertained by a puppet show. They seemed to be enjoying it and so were a nu 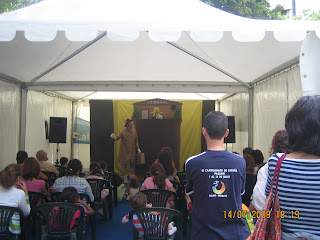 mber of adults who had stopped to see what was going on. The children were also served by the stall for Libros para Soñar – Books to Dream with – which had a lovely collection of story books for children of all ages.

It is very strange to see the books I read to my own children – The Very Hungry Caterpillar, The Bad-tempered Ladybird and so on - translated not only into Castilian Spanish but also into Gallego. Some are fairly straightforward and do well in any language but I would like to see what could be done with the crazy rhymes of Dr Seuss’s The Hat in the Cat or The Butter Battle Book. Now there’s a challenge!
Posted by Anthea at 12:01