Yesterday was Palm Sunday. In some places around the world they held religious processions. What I saw here was a procession of Chevrolets and other nicely preserved old, mostly American cars. As I went out for a run they turned into the housing estate behind our house. What a curious things to do! There is nothing there of interest to classic car fanatics. Then they turned out again, having mistaken the road. Like raucous, exotic birds they went back the way they had come. On my way back I came across some of them parked in the industrial estate near our house. Perhaps the drivers had stopped for breakfast. There was nobody around to answer my questions so I took a few pictures and went on my way. 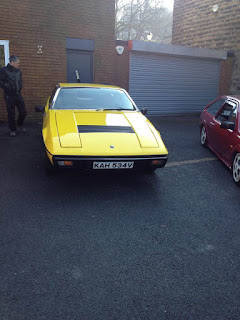 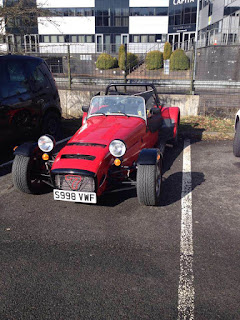 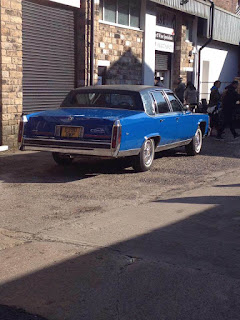 My friend Colin mentioned in his blog the other day that the Pope has declared this year to be an Año Jacobeo. I wondered if this had anything to do with the day of the week on which the feast of Saint James falls. If July 25th is a Sunday it makes the year holy, an Año Santo, and a special door into the cathedral in Santiago de Compostela, usually bricked up, is opened up to pilgrims. So I googled it. I didn’t find anything much about the Año Jacobeo business. I did discover that the 25th of July is a Wednesday this year - nothing special then. And I found this:-

“Saint James had a special place in the Central African Kingdom of Kongo because of his association with the founding of Christianity in the country in the late 15th century. Portuguese sailors and diplomats brought the saint to Kongo. When King Afonso I of Kongo was facing a rival in battle, he reported that a vision of Saint James and the Heavenly Host appeared in the sky, frightened Mpanzu a Kitima's soldiers, and gave Afonso the victory. As a result, he declared that Saint James' feast day should be celebrated as a national holiday.”

Curious! For an apostle of the Prince of Peace, Saint James is amazingly warlike. He is also known in Spain as Santiago Matamoros - Saint James the Moorslayer - and is often portrayed on horseback, sword in hand, with dead Moors beneath his horses feet. And he is supposed to have appeared in a the sky above one of the battles in Spanish history. What a busy warrior!

Much is being written at the moment about data sharing, most of it without the knowledge or consent of the people whose data is being shared. I want to know why the computer, and my phone in the middle of Friday night, was telling me that yesterday was the birthday of a friend of ours. This is a real friend, not a virtual friend on social media. He is not a “friend” of mine on Facebook, which regularly tells me to send birthday greetings to a variety of people. His wife is one of my Facebook friends but Facebook doesn’t remind me about the birthdays of spouses.

Not only that, but Phil also received a message about the same friend. And Phil is not on Facebook and does not tweet or twitter. He only uses email. So how does social media know when this friend’s birthday is and why are they sending out that information?

I also wonder what use all this data sharing makes of the sort of stuff someone I know frequently posts: “Done the washing!” “Cleaned the house!” “Cooked a good stew!” “Tired! Signing off now!”
Posted by Anthea at 03:48