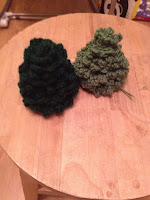 I spent yesterday evening helping my eldest granddaughter to crochet mini Christmas trees. These were to be a present for her boyfriend's mother. There she was, setting out to impress by being really practical. Unfortunately she was struggling to make head or tail of the pattern she had acquired over the internet. So she called on me for help. At first, on Sunday evening, I was as flummoxed as she was and almost gave up on the whole idea. Then, at some point in the middle of the night, it dawned on me that the pattern was using American terminology for the various stitches. So on Monday morning I had another go and made it work. And consequently I spent last night making sure she could also do it. Success!


One of the best things about Christmas is that when the post comes dropping through your letter box it's not just advertising rubbish, bills and bank statements. No, you get actual communication, greetings from real people, written with proper pens. Sometimes they contain news about what old friends have been up to but even if it just says, Merry Christmas, love from X, Y or Z, it's still nice to hear from people. Some people say you should send e-cards, on the grounds that it is better for the environment, but you can't stand e-cards in the mantelpiece.

While I like getting a handwritten note in a card, I can't say I am a fan of round robins. Somehow a one-size-fits-all communication ends up sounding like a lot of boasting and includes bits of news that don't necessarily need to be sent to everyone on your Christmas card list. Fortunately we don't get many of these. And, of course, you can just throw them away unread if they make you feel really grumpy.

Christmas is a funny time though. People lose their inhibitions to some extent and go around wearing Christmas jumpers, sometimes paying extortionate amounts of money for a garment adorned with sparky reindeer, which you can only possible wear for one or two weeks of the year. Then there are earrings. I have to confess to wearing Christmas earrings, usually quite restrained snowflakes or snowballs or small fir trees, but some people go over the top and wear the ones with flashing lights.    And out and about this morning I came across an elf - well, a grown woman in an elf costume, albeit a rather fetching elf costume. It was only nine o'clock in the morning so goodness knows where she was going dressed up like that. I suppose she could just about conceivably have been on her way home from somewhere but if that was the case she looked remarkably fresh. So I greeted her with a cheery, "Good morning, Elf!" And we both went on our way.

And then there are the decorations. When I was a child you sometimes saw a Christmas tree placed in a window so that it visible from the outside world. and that was all. My mother objected even to this. She said it was "common" and really was a way of showing off that you had a great big tree and wanted to impress everyone. I wonder what she would think about the almost competitive element there is nowadays in external house decoration. Here is a link to a set of photos of the most gaudily decorated house. 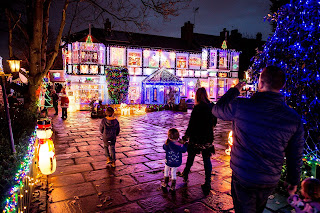 The description alongside one of the pictures reads as follows:

"Sheila and John Gill began hanging decorations and fixing thousands of lights over the August bank holiday. The lights, which completely cover their house and garden, will stay switched on between 4pm and 8pm each day until 31 December."

My first thought when I saw it was about the electricity bill. Then there is the light pollution aspect. Imagine living next door to it or, even worse, across the road from it! But mainly I am amazed that someone can start to plan Christmas before August is out of the way.

Totally over the top!
Posted by Anthea at 04:56