We left a rather damp and very dull Delph yesterday afternoon to go to Liverpool and catch a plane, which set off late, to Porto. I am uncertain - no, I simply do not know - what was the nationality of the air hostess who made most of the announcements over the public address system. I am sure that on a one-to-one basis her English is excellent but as I listened to her announcements I was sometimes convinced she was speaking a foreign language, possibly Portuguese as we were flying to Portugal, and then a few words, the odd phrase, usually her closing sentence, would reveal that in fact she was speaking heavily accented English. It's a good job she didn't need to deal with an emergency, that's all I can say.

Arriving at Porto at around 7.45 in the evening, we stepped off the plane into warm air. It wasn't quite the wall of heat that hits you when you step off a plane in Malaga, for example, in mid-August but it was definitely warm. Someone from the chess organisation, a gentleman whose name we must have been told originally, two or three years ago, but which did not stick, was waiting to drive us to Figueira da Foz. Temperatures have been as high as 27 and 28 degrees over the last week, he informed us, as he switched on the air-conditioning. Wow! I had suggested that Phil might like to bring some shorts but he had pooh-poohed the idea! Such is life!

This morning I ran down the promenade and back along the boardwalks, admiring the new pathways, one for cyclists and one for pedestrians, that have been installed along the beach. Very nice! This is what all the notices about improvements to the beach area are all about then. The cycle paths have been well used this morning, as far as I can tell from our balcony. This is a good place for cyclists, rather like my hometown, Southport. It is largely flat but with a few gentle inclines to remind you what your gears are for. 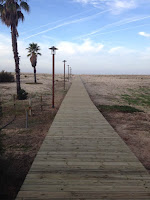 In fact, Figueira is like a rather superior Southport. It has a long, very flat beach, with the sea out in the distance. The boardwalks mentioned earlier must allow sun-worshippers to walk down to the sea in summer without burning their feet. Because that is a major difference; if we think it's hot now, it gets really, seriously hot in the summer months. Also, the sea is blue, rather than the muddy brown of the Irish Sea. And there are no oil rigs. Instead of a view of Blackpool in the distance, you see Buarcos, the next small town up the coast. The beach is very clean as well. Yes, superior in all sorts of ways!

Later this afternoon we shall go to the opening ceremony of the chess tournament, celebrating the connection of the Spanish poet Miguel de Unamuno with chess and with Figueira. Who knew that there was such a connection? Nobody mentioned it when we studied his work at university all those years ago.

Let's see how my very rudimentary Portuguese stands up to the cultural onslaught.
Posted by Anthea at 07:57