Hibernation is beginning to look more and more like a serious and rather attractive option. I’m not really talking about the total thing of curling up and going to sleep. No, what I mean is the idea of laying in stocks of food, reading matter and the DVDs of films and TV series you missed the first time around and sitting in a nice warm room, looking out occasionally to admire the beauty of the snowy exterior. For no matter how much the weather 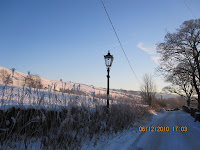 men may assure us that we are due for a minor thaw, around here the Narnia-impression (always winter but never Christmas) has been going on a little too long. And besides, as far as I am concerned there really isn’t a great deal of difference between 0°, -4° and -8°. Of course, I understand that there is a serious difference but in practical terms of putting on multiple layers of clothing, stout boots, a couple of pairs of gloves (at least!) and woolly hats and scarves it’s pretty much the same.

Naturally, I have made forays into that icy exterior: the supermarket, collecting small people from school when our daughter has some vital reason for not being there and then Christmas shopping because, despite the Narnia impression, Christmas is approaching rather quickly. However, I do look forward to being able to venture out without having to go through all the wrap-up-warm procedure, if the ice and snow ever clears!

I feel very sorry for all the motorists who have been trapped in their cars up in Scotland and, according to something I read this morning, in the Paris region where the airport was once again brought to a standstill for a while. Since it was a Spanish newspaper I read this is there was, of course, a story about Spaniards suffering in this situation. A group of Spaniards was returning from Buenos Aires to Madrid, changing in Paris. Having landed safely in France they were unable to continue their onward journey because of the weather.

Their plane was constantly listed as delayed and finally, after being issued with several lots of boarding cards all to no avail, they were told that they would have to wait overnight in the terminal and fly out the next day. Now, because their plane was classified “delayed” and not “cancelled” they were not entitled to be put into a hotel for the night. Air France kindly gave them blankets to wrap themselves up in but that was it, this despite the fact that on the Air France website the plane WAS listed as cancelled. Oh, and the terminal turned the heating off!!!

Now, this was not a cheapskate budget airline from whom we might expect such shenanigans but Air France. That’s funny; I seem to remember in October of last year having a great deal of difficulty helping to sort out the return journey of a group of chess players from Vigo to Manchester, flying with … wait for it … Air France.

This morning, apparently, the intrepid and probably rather chilly Spanish travellers were issued with new boarding cards but these were pending confirmation and quite clearly labelled “not valid for embarkation”. Excuse my lack of understanding but what exactly is the point of such boarding cards?

However, all is not ice and snow everywhere. In the Faro de Vigo online I came across a video clip about Alicante. It began, “Mientras el resto de España tirita de frío, en Alicante … hace calor”. (While the rest of Spain shivers with cold, in Alicante … it’s hot.) Temperatures of 24° have encouraged people to go sunbathing, to stroll around in shorts and t-shirts and in the case of one hardy soul, to go for a quick dip. Climate change is obviously creating some very odd effects!
Posted by Anthea at 05:31