Do you spik Inglis?

Sometimes it seems that just about everybody does. Speak English, that is. There must be far more people from non-English speaking countries who can at least get by in English than there are Anglophones who can manage a bit of some foreign tongue. Here at the chess congress it is certainly the common language. Scandinavians speak to Germans, Finns speak to Spaniards, and even Englishmen speak to Scotsmen and all in English.

However, when you get round to written English it’s a different matter. Here in Magaluf you can eat an English “breakfas” and some time later have “lam chops” or “spare ribbs” for lunch and finish off with a “roastbeaf” dinner. Then you can wash it all down with an international “bieer” or even “two bottle of Bud”. One place lets you know that you can “have a table reserve for you” and on its paper placemats wishes you a “good appetit”. Our hotel has a series of notices, mostly in good English, for its English “gests” and just down the road you can buy some “comfty shoes”. I must get some of those. Then, of course, there are the apostrophes. Willie’s Bar doesn’t actually have an apostrophe; I leave it to you to work out what it looks like. And then there is a bar where “hen’s and stag’s go wild”. But then, I could come up with innumerable examples of missing or inappropriate apostrophes on any high street in the UK so I shouldn’t criticise the Spaniards. It is fun though!

On the subject of language, it appears that Vigo’s own Alberto Nuñez Feijoo has been giving advice to the PP in the Islas Baleares about bilingualism in schools and even multilingualism. Clearly it has all worked so well in Galicia that other regions can follow the model which I seem to remember was based on the Welsh system. Multiculturalism rules OK!

I mentioned a “personality” by the name of Belén Estebán just recently. Well, now I have discovered that down in Cáceres, in the South of Spain, they are getting ready to welcome Ms Estebán for the opening of the Festival Cáceres Pop Art on November 11th. This might be some compensation for having failed in their attempt to become Capital Europea de la Cultura 2016. Ms Esteban is the inspiration for the works produced by artists for this year’s festival. Here are a few examples. 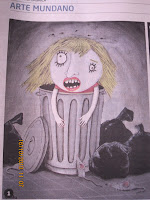 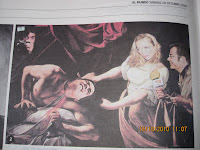 There are reports that the agents of this “personality” asked for 12 000€ for her to appear at the opening ceremony but now apparently they are working on getting expenses.

In other years people such as Fidel Castro or King Juan Carlos have been the muse or victim (depending on your point of view) of the festival.

Next Friday sees the presentation of the Premio Principe de Asturias de los Deportes to La Roja for their great footballing success. Unfortunately la selección española can’t be there in its entirety. Anyone who plays for Real Madrid or Barça can’t attend because spoilsports Jose Mourinho and Josep Guardiola won’t let them. They have games the following day so permission has been denied. There were comments in the article I read about the amount of money spent on private jets and how they could easily have flown them back to their respective teams in time for the games. So much for teamwork!
Posted by Anthea at 09:40