On Wednesday we left rainy Vigo for slightly less rainy Oporto – at least it didn’t rain until the early evening and then it was nothing like the tromba" which drowned Vigo on Monday evening – en route eventually for the UK for a brief stay. Rather than catch a 7.00am bus from Vigo to Oporto airport on Thursday for a 9.45 flight to Liverpool, we chose to go to Oporto on Wednesday, do a little tourism and be able to set off for the airport just a bit later. We arrived to find Oporto blustery but mainly dry with occasional sunshine although I read in their local paper about damage done by heavy rainstorms at the weekend. Clearly they had the same problems as Vigo weather-wise.

We booked into our hotel at lunchtime, late lunchtime given that we had to put our watches back an hour to Portuguese time. Our first priority was, indeed, lunch. It seemed a long time since breakfast.

Down by the waterfront, which looked remarkably like Newcastle on this day of grey skies, wind and threatening rain, we looked at tourist-trap restaurants and decided against them. For once we had not done our homework; usually we go armed with a list of possible eating places meeting our criteria.
We ended up at a little place called O Caravela da Ribeira on Rua Mouzinho da Silveira which offered a perfectly acceptable prato do dia for €5 each: vegetable soup followed by bacalao in a kind of warm potato salad or little fish (unnamed) with salad. Haute cuisine it wasn’t but good basic fare which filled a space nicely. We must have started a trend; some Italians came in after us and then a couple of groups of Spaniard. A restaurant needs custome 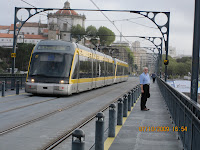 rs to attract customers. There is little less appealing to potential diners than an empty restaurant. We have considered offering our services – we would happily sit and eat near the window to act as a magnet for other clients!!

After lunch we went exploring, walking the walk, one of our favourite pastimes. Last time I came to Oporto I promised myself I would cross the 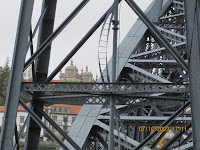 Luis I bridge on the top level. However it was not immediately clear how to access that top level where the trains run. Clearly you were not intended to use the ladders in the structure itself; even Iberian health and safety would not allow that!
We looked at a huge flight of steps going u 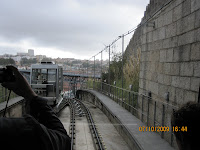 p the hillside and opted for the cable car. However, when we reached the top it still was not obvious how to get to the bridge but we found it and successfully made our windy way across, oohing and aahing at the view from up there. 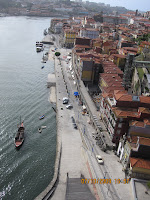 On the other side of the river we had to ask some locals how to get down again to the lower level for the return journey and then went down some steps and through narrow old streets down to the water’s edge. 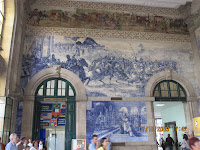 Back from Gaia to Oporto we headed back up the hill towards our hotel as it was just starting to rain, calling in at the impressive railway station on our way. It’s worth arriving at Oporto by train just to see this amazing station. 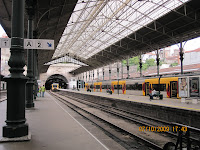 En route we bought fruit: 2 oranges, 3 small pears AND a small bottle of water for a grand total of 85 cents.

After a short siesta we set off on a fruitless search for the oldest bookshop in Oporto, Libreria Lello, former haunt of the intellectuals of Oporto. We never found it but we did come across FNAC, one of my favourite bookshops – in Madrid, Paris, Barcelona and now Oporto, this is one of the best organised bookshops I know.

We also found, after much searching, the Café Majestic, where writers and artists are said to have met and talked in the early 20th century although in the end we did 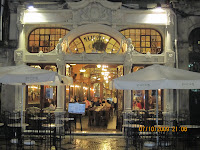 not go in. It had taken us so long to find it that the moment had passed. We had a small rant about the poor quality map in our little Spanish guide book and about the map provided by the hotel. Between un-named streets in the one and small streets just eliminated from the other it’s a wonder we even found our way back to the hotel.

On Thursday morning we were up bright and early watching the sun come up through the early morning clouds as we travelled to the airport on Oporto’s efficient metro trains. The, after a quick breakfast at the airport we joined the queue to get on our flight to Liverpool. By late Thursday evening we knew we were back in the UK – colder than we’d been since last Christmas!
Posted by Anthea at 07:35