Now, I know that the English have borrowed like mad from a range of other languages, including Spanish. We say hasta la vista, baby and put off our deadlines with a cry of manana. We talk about machismo and don't know whether to pronounce it (correctly) Spanish style with a CH (as in cha cha cha) or Italian style with a K (as in che sara sara).

The Spanish borrow from us and even change the spelling to match their own system. Thus, leader become lider and meeting becomes mitin. And OK seems to have become international.

But when, I ask myself, did the Spanish start using ciao as a way of saying hasta la vista?

While it's not true that all Spaniards speak English, it is true that they are interested, are aware of the importance of speaking some English for improved employment opportunities and go out of their way to try to learn more. Toddlers are sent to bilingual nurseries, teenagers are sent to extra lessons at the various escuelas de idiomas and adults, at least here in Vigo, can go to the Club de Lectura de Ingles (two levels: intermediate and advanced) at the local library.

Then, of course, there is the great gallego versus castellano debate. All the schools give many - in some cases all - of their lessons in the local language, which opponents dismiss as a kind of Spanish with poor spelling, a sort of dyslexic Spanish. Those who want to pass their oposiciones (competitive exams cum interviews) to get posts as funcionarios must demonstrate proficiency in the language and to that end the local authority offers free classes. Mind you, it is quite hard to sign up for these if you have no gallego as all the information about the courses is in that language.

However, for a Spanish speaker it is not really too hard to understand it when you hear it, at least not the version they speak around here. I have been told, though, that the gallego they speak in Orense (Ourense) or Lugo is much more difficult to follow. That, of course, is another of the problems: which version is correct. Academics have been studying the language for a good few years and have recently published as novas normas (the new rules), provoking further debate as to which words are REAL gallego words and which just cannot be accepted. Some Spaniards say they have difficulty reading it but, personally, I find that saying the words out loud helps comprehension; that's when you realise that maybe the gallego word really could be just an alternative spelling of the word you knew all along.

Be that as it may, there are regular letters to local papers about the rights of parents to choose the language in which their children should be educated and the relative merits and benefits of both. Some politicians are also regularly criticised for jumping on the bandwagon and speaking gallego almost exclusively at election times and then for speaking it badly.

Some English visitors think that it doesn't matter if you speak neither castellano nor gallego. As for me, I think having a go in both is part of the fun of being here as well as being just plain courteous. However, some friends of ours who came to Vigo for the day - yes, on a cruise ship - proved that it is possible to have a good conversation and establish a relationship using very little Spanish indeed.

On the day of their visit we went along to a local restaurant for lunch. After a glass or two of wine one of our friends decided to ask the waiter why Manchester United was not represented among the many football scarves decorating the walls of the restaurant. With minimum Spanish on his part and minimum English on the waiter's, the conversation continued: the quality of modern football, the number of Spanish players in English teams, David Beckham, which teams each preferred, all in all a comprehensive discussion of football. The upshot of the whole thing was that our friends promised to send a Manchester United scarf to us so that we could deliver it to the restaurant. This we duly did in December, to everyone's delight. 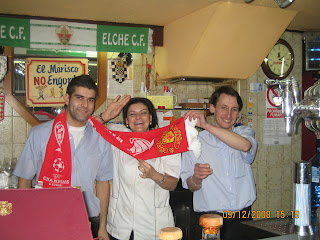 That was when our friendly waiter told us that in actual fact his favourite English football team was not Manchester United at all but Liverpool; after all, half the team seems to be Spanish! Maybe next time ....